Hi, being a human with a brain is hard and the whole theory of mind thing doesn’t make it much easier. TL;DR Theory of Mind is your ability to recognize that other people also have thoughts, and they’re not necessarily governed by the same rules that yours are. For instance, a person who watched Disney as a kid will have a lot of strong ties to that entire set of media, musicals, characters, moral underpinnings, etc. where someone who never had that experience will be very confused as to why this 28 year old is gushing about Frozen.

The hard part is that brains, really, really don’t work the same way. I’ve been officially told I have ADHD. People also keep telling me I’m autistic. I’m not sure how much I believe that second one, or how important it is, but it’s going to be relevant later when I talk about other people, so hold that in mind. Mental disorders like these are extreme cases of brains not working the same way, so they’re much more obvious, someone with anxiety has a fundamentally different experience of the world from someone without it, but as far as I can tell everyone’s brains are wired a little differently.

This is, however, helpful for getting a much cleaner look at how brain differences might affect different people in certain contexts:

WARNING: This is almost definitely a skewed view, which I’ll get to now, along with that thing from earlier.

I hang out in IRC. IRC is a text chat system, it’s old, it’s bad, but it works and it looks a little like this: 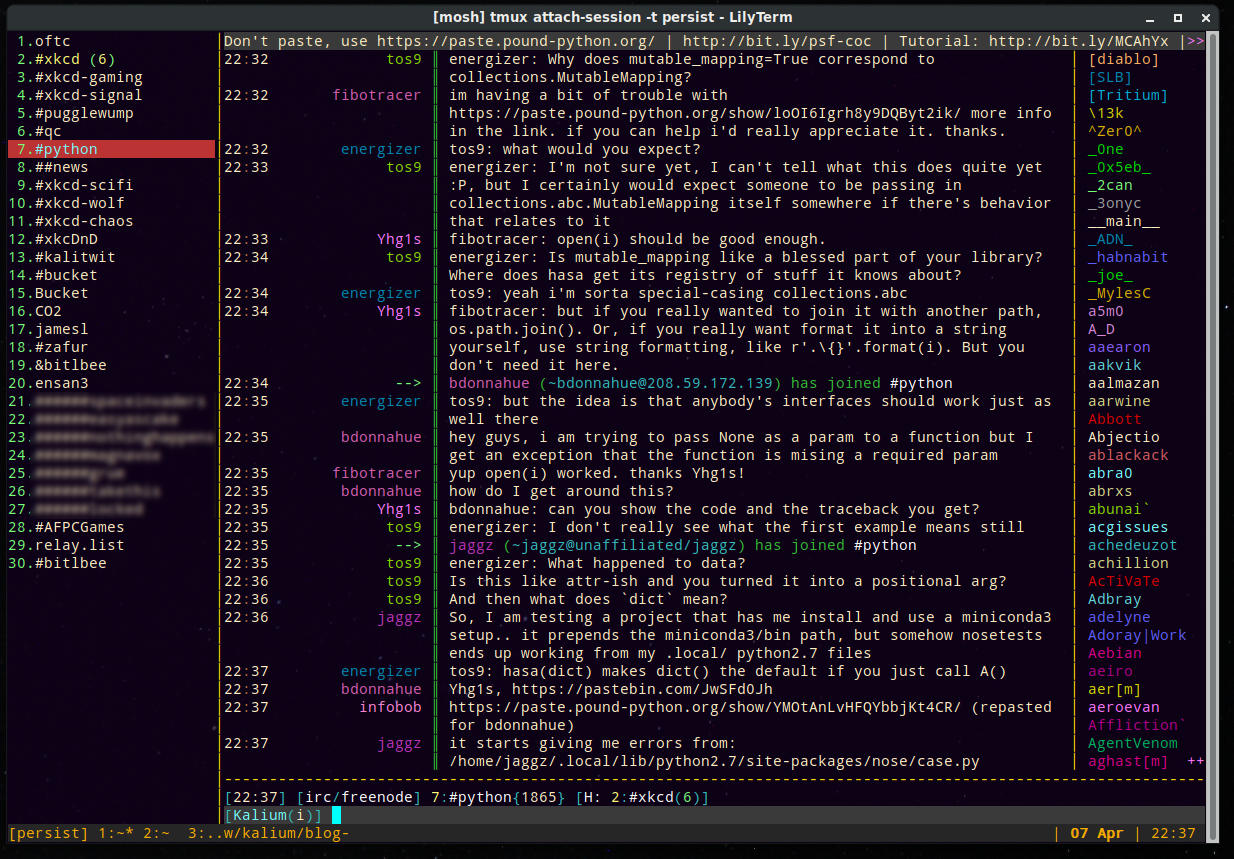 The first thing you’ll notice there is probably that there’s an awful lot of words. Indeed, it’s all words. That’s running in a terminal, remotely. It can’t display anything but text. And emoji, I guess.

Relatively recently I learned that a lot of people struggle to communicate effectively with text chat. I knew people had trouble writing communicative text, like, say, blog posts (meta!), but words mapped pretty easily into text for me. There’s a few tricks used to help convey emotion but absorbing those was pretty easy. Use * around your text to show emphasis, /s on a sentence if you need to make it clear there’s sarcasm, put b i g s p a c e s to show that words need to be read with a certain kind of emphasis, use emoticons (like this :P) to convey useful emotions. All nice easy rules, in-band signalling, easy to parse, and impossible to forget when you go back and read a line out of context.

There’s some things wrong with that statement

Of course, there’s a sampling bias here. People who struggle to talk over text don’t do it. In the past, they just didn’t hang out online. Nowadays they use Discord or TeamSpeak or whatever new AV based chat is hip these days. Our social channel has a side Discord, but the audio chat is near never used. We’re used to how text… sounds? Voices don’t convey the same images we’re used to presenting.

Within that sampling bias, you find a few common things. Certain kinds of people gravitate towards text-only chat. Many, many people in the channel have some kind of brain weirdness. A lot of autism, a lot of anxiety, a lot of bipolar, a lot of ADHD, which is something you’ll know if you’ve ever seen one of these discussions go down anywhere a lot of computer-oriented people hang out. There’s also lots of queer folk. Why? I’m not sure, but my guesses would be

So here you have a very particular sample of the world. You have people who fill the intersection of Internet Connected, Prefer Text, Enjoy Socializing. At some level, a lot of their brains are similar. They’ve got shared experiences and habits. You can say something like Eternal September and have an instant understanding amongs most chatters, and those who miss it will probably search up, read for a couple minutes and come back up to speed.

You start thinking like this in real life too

These habits, then slowly start to get embbedded. I’m very used to this. I’d bet that most of my socializing happens in text. Between IRL friends who live far away and internet friends who are scattered to the six winds, I barely see the faces of the people I could identify offhand. This makes working with people who don’t have this history a little weird.

IRC has… rules. Not rules, really. Etiquette? Netiquette? Whatever it is, it’s got a way of interacting that assumes a lot. You don’t announce when you enter or leave a conversation, you don’t ask questions unless you’ve done research, you regularly have multiple conversations happening in one band at the same time, with all participants keeping track and shuffling focus on their own. None of these work well in the real world, but what I’ve found is that when I talk to people who also mostly chat online, they do this IN REAL LIFE.

That is to say, when people who talk a lot online talk to each other IRL, they are a lot more comfortable just slipping out of a conversation as they finish, they’ll pick up a phone and look something up while keeping up with conversation in the back of their mind. They’ll talk back and forth to two different groups at the same time. I do this, sometimes.

So, the normies, huh

The reverse is also true. People who barely chat online engage in text chat without adjusting how they talk. If the n people are typing banner shows up, they’ll stop typing. Because typing equates with talking, even though this creates awkward deadlock. I firmly believe text chat between normies would be improved without a people are typing notification.

People who don’t chat online can’t convey feelings as well. Emoji have helped with a lot of this: they’re a socially appropriate way for you to convey a breadth of emotion by just tacking something onto the end of a sentence. It’s like a footer that says “here’s how I’m feeling”. It’s inelegant but it’s pretty good. I like emoji.

They have an awkward time trying to pick up these emotions too. When you space out text, they might identify it as you replicating a meme they say on a screenshot of a tumblr post on twitter via facebook. (Look okay I have a thing about this kind of stuff get used to it.) They’re disconnected from the concept of text as a medium for communicating personal thoughts. They read it in articles and lists and blog posts and tweets but so often it’s dry, empty of emotion, a direct conveyance of information.

Does this sound familiar

Hi yeah that sounds a lot like what people say about speech and autistic folks. Indeed, circling back around to Theory of Mind, there’s often a line about deficient Theory of Mind in diagnoses of Autistic people. It’s hard to convey how you think to other people when your medium limits you tightly. But where some people fly through speaking with all the right intonations and body movements to convey how they feel, but for some of us, that feels like it’s meaningless. I certainly don’t pick up on a lot of subtlety that people expect me to get. It takes me a long time to realise that someone is annoyed that I’m talking to them, so I often talk for longer than I should before I back off.

Hang on, I’ve realised I should get an example, let me listen on on the chatroom and see what they’re saying.

There’s two conversations happening there. One is an argument about why capitalism is evil, the other is making fun of audiophiles. They’re completely interleaved and the only thing separating them is if you keep track of who is talking to who. Several people are in both conversations if I felt like posting more log, but this went on for an hour and I don’t feel like sanitizing and anonymising that much log.

The point is, this isn’t how normal people talk, at least, not with words. But this works, there’s no other way to do it. Spawning an all new chatroom just to converse is inefficient and doesn’t carry other users with it, so people would miss chats. Just waiting sucks and we all have other things to do so you might not be there when it’s time to talk. A channel like this is a giant room filled with 300 people and we don’t all have the same interests, or even the desire to listen to the same topics. It’s handled differently and in this case, it seems like it favours people who don’t really do well in a spoken environment.

If you’ve ever been lost in a text chat with someone like my friends, then congratulations, this is what it’s like to talk to other people when you can’t really pick up on what I’ve been told are vitally important subtleties that I seem to miss. It’s exciting! Like a game of dice, but with your social standing.

Hey this got kinda off-track, Kalium

This post was originally going to be a dive into Infodumping, and how it’s easier in text than in speech. Then I fell into the hole of why it’s so much easier in text than in speech, and you get this. It’s messy. There’s not too much of a point beyond the idea that different people think differently. I’d like to imagine that if you’re an adult you have figured this out, but if you’ve not, or you’re a child, hopefully this lets you go find something else to read that might help you think better about brains.

I’m by no means any kind of expert, this is rambling on personal experience. There are no doubt doctorates earned on these bases, I feel like doing some reading myself now that I’ve written this, and I might end up shoving some edits in here. In the meantime, if you have anything to add to this, mail me or contact me on IRC. If you don’t like text, Tox does voice calls, but don’t expect me to pick up in a hurry :P